We were in a small town, Yucaipa- when I was walking down the main street in search of something different to photograph when across the street from where I was walking was this motel.  I stopped to see it more clearly  and then  a wave of nostalgia washed over me.

I remember the trip in 1959 as a kid  when we moved from Kansas City to California and stopped in a few motels along the way.  I don't remember for sure if it was during that move or the trip we did several months before when we came out to California on a vacation but this motel just looked familiar to me.

I saw two boys playing out in front and the first photo shows them standing around and the second to me, looks like the older boy is challenging his younger brother to do something that might get him in trouble.  There's something about the way he is leaning towards the little guy.

Being in this town and walking on the main street seemed such a flash back to the 50's.  Even the smells of fall were present.

Speaking of smells, yesterday I walked out on our deck and someone was burning logs in a fireplace and it was the most fragrant incense smell.  Seeing as how we are surrounded by incense cedars all over the town and in fact, the whole mountain area, it would make sense that this is the wood they were burning.  I don't think I had ever before smelled this type of wood burning ....at least around here before .  Most of the time it is a wood burning smell that can get so obnoxious you have to close the windows. 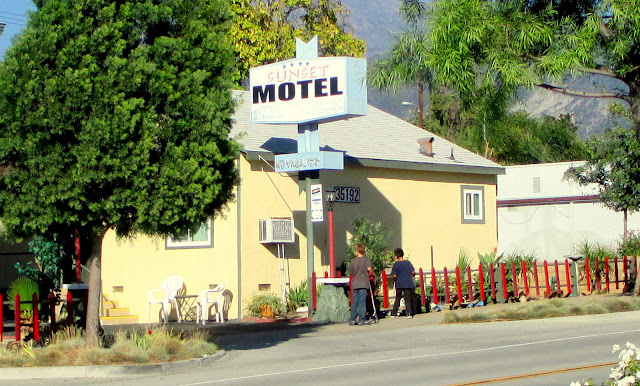 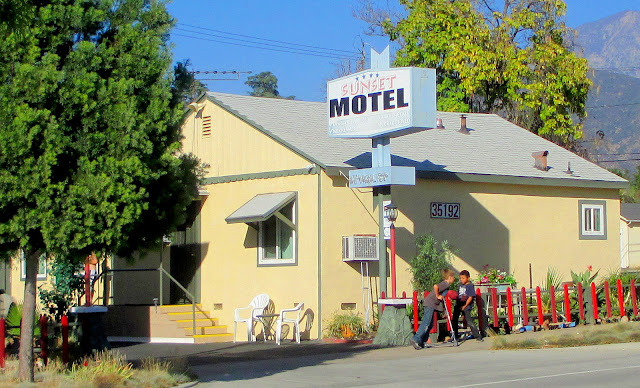 on October 19, 2019
Email ThisBlogThis!Share to TwitterShare to FacebookShare to Pinterest

What a darling scene with the mountains in the background. I usually love the smell of wood burning, but not the smoke wafting into windows!

Sunset Motel...I think lots of town in California have named their places "Sunset Hotel"...at least in the past...it's like classic from the 60s.

That incense fragrance sounds so good!

This motel brought to you wonderful memories. There are not many motels like this one I think. It's the very special motel with a nice name. I also enjoyed reading your memories. The burning log, the wonderful fragrant smell... I also liked it!!!

__ As the shadows change, this older Motel and its newer plastic chairs... then, this challenge between younger boys.

I'll beat-cha; as this scooter race begins; a foot's push!

Awesome capture. I think you may be right on the "troublemaking" stance.
Waves of nostalgia come by smells and feelings. Fragrances trigger memories in me too.

What a cute little motel!

Oh thank you for sharing your memories...yes, it is strange how certain things trigger rather powerful memories and impressions.
Such a picturesque motel. I would love to stay there!😊😊

I love this scene!!!

thanks all you - just read the comments~

What a cute motel! My childhood was filled with similar memories in Oklahoma, where I grew up. On vacations we used to stay in motels, and Mom and Daddy never made a reservation - unheard of in these days.